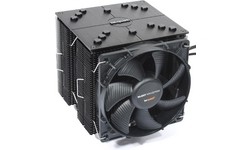 Cooling
Phenom 965 - For the few months I had this cooler mounted on my AMD Phenom II 965 BE, it performed admirably. I was very pleased with my somewhat large investment into a capable cooling unit. Temperatures which had previously peaked incredibly high under a TX3 were now sub-70's even when overclocking at 1.55V. The cooler really performed well for this type of processor, even under large overclocks. At 1.55V I was able to sustain a 4.1 GHz overclock on the Phenom 965 for benchmarking and Prime95.

3930k - With the experience of the Phenom in mind, I expected relatively decent results from the 3930k. This turned out not to be the case. The amount of heat that this processor can deliver is phenomenal and one really needs a top of the line air cooler or water cooling to keep this processor cool for a reasonable overclock.

General - The weakness of the cooler (which became evident on the 3930k) is two-fold: mount and cooling capacity.

The mount of the Dark Rock Pro worked brilliantly on the AMD processor, the connection it produced really was excellent. You could feel the processor being pressed down by the cooler as you were screwing it in. I cannot really explain it any differently, other than that you could 'feel' the processor making good contact with the cooling unit as you screwed in the backplate. But the mount was clearly not designed for LGA2011. I never had the same feel when attaching it to the 3930k. The crux of the problem lies in the elevation of the mount with respect to the processor. Ideally there should be a slight clash in contact between the two, the resulting strain being taken up by the mounting system. That would provide a good fit and contact. However, after having re-mounted the cooler a dozen times, I could not bring forth such a situation and the cooler remained loosely in contact with the processor. The true cooling capacity of the cooler only became evident when running Prime95 at stock clocks and seeing the temps hover at approximately 80 degrees. If, however, I pressed the cooler down on the processor during the stress test with my hand, the temps immediately dropped to approximately 69 degrees. And that is quite plainly a huge difference. With that in mind, I applied for a new mount and I managed to receive one from Be Quiet. Sadly, the new mount suffered from the same drawback. The cooler is now in contact, but not clamping down on the processor.

While the cooling capacity is more than sufficient for most mainstrain processors, it will struggle with processors such as the 3930k or FX8150. These processors can produce an immense amount of heat with even minor overclocks. And lets face it, people do not buy processors of this calibre to have them run at stock clocks (thats what the Xeon's are for). You will overclock these processors and they will produce ample amounts of heat. With the Dark Rock Pro, you will not be able to experience the limit of overclocking and will be hampered by heat production. Alternative cooling solutions such as the NH-D14, Silver Arrow or Phanteks seem to provide overclocking potential up to 1.40v (which could mean a 4.6 or 4.7 GHz overclock).

For reference, here are some temperatures I measured during a Prime 95 run of 0.5 hrs:
Overclock: [baseclock freq incl strap/multiplier/result freq/vcore]

The results indicate that a better clamping mount would provide approximately 8 degree better temps. They also provide insight into what the capacity of the cooler is. You'll probably end up with a max OC voltage of around 1.350v for benching, and 1.275v for normal use.

Sound production
Sound production is where this cooler starts to shine. It isn't just quiet, its silent. There's no other way to describe it, other than that the silence really catches you off guard. During the first two days I had purchased the cooler, I double checked that I had plugged in the fans in the correct socket when starting the computer. I just couldn't believe that a cooler could be that silent.

Even at full rpm, the cooler is extremely quiet. For reference, you can barely hear it over an idle Asus GTX 580 DCU II gpu, its that quiet!

I cannot really say more on this subject, other than that the sound production (or lack thereof) is absolute mint.

Mount
The Achilles heal of the cooler. The lack of clamping force on the processor has been dealt with above, since it directly impacts the cooling capacity. The focus here will lie on the mounting of the cooler itself. Keep in mind that this is a sizeable cooler and that you will be required to unhook the front fan in order to install memory. Low profile RAM is necessary to use this cooler, unless you want the fan sticking out on top where it does little good. For a insightful review of the Dark Rock Pro's mounting system, see Overclock3D's review on youtube.

3930k - Mounting the cooler on the LGA2011 socket was a lot more simple. Firstly, it is actually possible to install it on a motherboard already situated in the case, since LGA2011 motherboard comes with a backplate fitted. The mounting system is slightly different than for an AMD processor. It basically relies on brackets fitting down on protruding screws, which are then clamped down with nuts. Initially I was very pleased with the mount, due to the ease of installation, until I discovered its impact on the cooling capacity.

Appearance
Best looking air cooler on planet at the moment? The complete black look and polished metal finish, make this cooler eye candy to say the least. Seeing as this is the more subjective part of the review, I'll keep it at that.

Conclusion
While the looks and silence are this coolers defining features, do not look to it for the best air cooling solution for high end processors. There are other coolers better suited for that.

Overall I am pleased with it, despite the fact that I am limited to an everyday overclock of 4.2 GHz. Would I buy it again for this processor? Probably not, despite how much I like the silence and looks. If the recently released Dark Rock Pro 2 has improved on the mount, then that cooler will be the better option. I would recommend this for up to i7 2700k range. 3570k, 3930k, FX8150 and upwards this cooler will really struggle with overclocking.